The following history of Antrim is an excerpt from A Stroll Through Antrim's Changing Landscape,
South Village, written in 2000 by the 5th Graders at Great Brook Middle School.

Antrim, New Hampshire looks like a typical New England town. We're quiet and we have a white church in the center. In fact, we have two white churches and a brown one.

Antrim is a town of 32 square miles with a population of 2360. It is part of the Contoocook River Valley. There are three important waterways: the Contoocook, the North Branch, and the Great Brook. 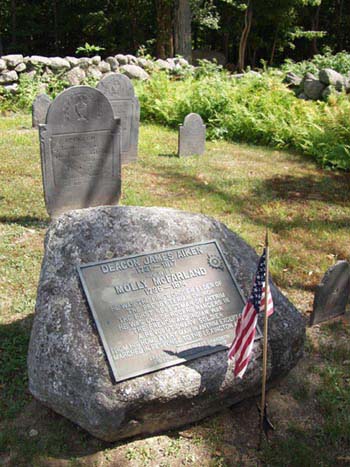 Although we may appear to be typical, we have a unique history. The settlers who came to the Contoocook Valley were not all English as they were in the earlier settlements of New Hampshire. They were Scotch-Irish.

Around 1600, some English investors had extra money so they bought land in Ireland. Scottish Presbyterians moved to Ireland and leased the English-owned lands. Land rents went up so the Scottish people had to move. In 1718, many migrated to Boston, Massachusetts. A large group went up the Merrimack River to Londonderry, which at the time was called Nutfield. Nutfield became heavily populated so people left to settle new areas. James Aiken was the second settler in Antrim in 1766. The Scotch-Irish, who came mainly for more farmland, populated most of Antrim and the other towns nearby. There are still some Scotch-Irish descendants living here in Antrim.

There were four villages spread over town: Clinton in the southwest, North Branch, Antrim Canter and South Village. Antrim Center, the first town center, included a Meeting House and a cemetery on Meeting House Hill. The Meeting House is gone, but you may still visit the cemetery.

The settlers built mills along the rivers. Some of these mills were saw mills, which cut trees into boards, and grist mills, which ground grain to make flour. Later, there were also a silk mill, woolen factories, a shovel shop, and the Goodell Company (a cutlery shop) in the South Village. The Goodell Company was the largest employer and was one of the major causes that led to the development of the South Village. 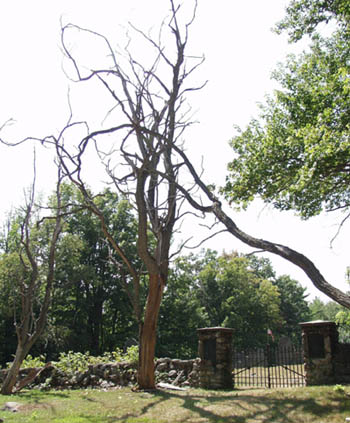 Industry first arrived about 1830 in the villages of Clinton and North Branch. More than 20 mills lined Great Brook from Gregg Lake to the Contoocook River taking advantage of the water created by the large drop in elevation. These mills built beside the little stream helped Antrim become the town that it was and is.

The railroad was another reason why South Village is the town center. The station was actually in Bennington, but South Village was close to the depot. The track was built between 1848 and 1853. Irish laborers, who came because of the potato famine, built it.

A major effect of the arrival of manufacturing in Antrim was a population shift to South Village along Great Brook. People needed to be close to the mills where they worked. By the late 1800s, townspeople had established little shops in South Antrim. Among these were a general store, a barber shop, a men's clothing store, and repair shops. most were on Main Street.

The Presbyterian congregation built a new church in South Village since most of the population had moved there. The Town Hall was built to accommodate town affairs.

Today most farms and factories are gone. Some of the mill buildings still stand, but they are no longer used for manufacturing, The schools and Frameworks are the largest employers. Most townspeople work in bigger surrounding towns like Peterborough and Hillsboro.

Thank you to Great Brook teachers Barbara Black and Anne Kenney for their permission to use this material. Please look for the full award-winning publication on this site in the spring.